As he was finishing his degree in management and computer sciences, Niv Shachar, a married 35-year-old with two children, began the process of looking for work and building a career as a programmer. Using websites and placement companies, Niv tried to find a job that matched his qualifications as an inexperienced college graduate.
Eventually Niv found a job ten months ago through Jobnet as a QA engineer at Eyeblaster.

Niv recalls:
During my bachelor degree studies I worked fulltime at a travel agency running the computers and assisting the CEO. This was really my first position in the high-tech world after my studies. Until I graduated I spent eight years working in a different field, and so when I looked for work in development without having any experience, I encountered a lot of difficulties.

How did you go about your job search?
After finishing my studies I looked for a position in development by sending my resume in response to ads in the paper. I also got help from friends working in the field. After a few months, when the search did not yield any unequivocal results, I decided to look in the QA as well. I found out that it's hard to enter the field of software development without experience. The entry threshold for QA positions is lower, which allows university graduates to get a foothold at one of the high-tech companies. My search process for leading positions in the field focused on placement companies and websites, but proved unsuccessful.
Eventually I discovered the Jobnet site based on a recommendation when I entered a Tapuz forum called, "High Tech Unemployed." Using the sites' broad database, which includes brief descriptions of the companies, up-to-date e-mail addresses and a link to a list of positions, I sent my resume in a methodical, comprehensive manner. 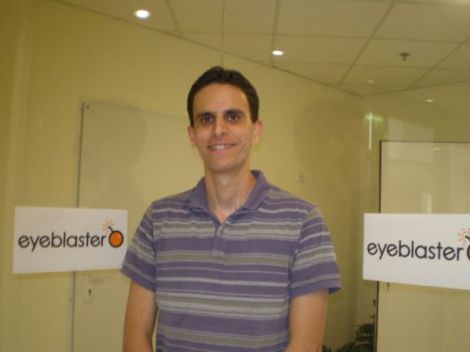 Niv Shachar at the Eyeblaster offices

How did you eventually wind up at Eyeblaster?

I discovered the company through a Jobnet representative who referred me to the company, which I hadn't sent my resume to, and asked me if I'd be interesting in a QA job at Eyeblaster. A few hours later I got a call from Anat, the human resources manager, to schedule an interview. She explained to me that the company specializes in building programs in the field of Internet advertising and referred me to the company's official website to see for myself. Unlike other companies, the recruitment process at Eyeblaster is very quick, which gave me a good feeling about the company.

Hadar Macy, head of recruitment at the company:
Eyeblaster develops technologies to combine rich contents with online advertising for advertisers, websites and ad agencies. The technology allows creativity, broadcasting and managing an interactive campaign through a single technological platform. The company was founded in 1999 and today has over 200 employees. During the past two years we have been in a significant recruiting process, which is still going on.

How were you taken in professionally and socially?
During the first months I underwent intensive training, but it was gradated to allow me to take in and assimilate material of gradually increasing difficulty. The system here, from a technological standpoint, is very high and complex. There's a slow, orderly training procedure during which new employees are helped by veteran employees, team leaders and even ranking managers, in order to adapt you to the job after internalizing the technology.
From my first day at the company my team leader pushed me to learn new fields, such as .Net, in order to vary the QA work. I was also challenged by a variety of tasks not directly related to the product itself, in order to open horizons. For example I developed management applications that will improve the work process within the team.

Did you compromise by choosing the field of QA?
I don't think I compromised. Experiencing QA is giving me a lot of background in systems. I'm exposed to the code of a product developed at the company, so the work is very close to software development. I think the experience I acquire will eventually turn me into a better developer.

What kind of a company is Eyeblaster?
The initial sense I got while I was waiting for my interview and watched the interaction among the people was excellent. The atmosphere was lighthearted and positive. I felt I clicked with the place. The more I advanced in the hiring process and was exposed more to the managerial level and the team leaders, I noted the personnel were very high-caliber people. The hierarchy is not felt on a day-to-day level. There's a very warm, familial feeling between the employees and the team leaders, and among the employees themselves. In the end I discovered my intuition has been entirely correct.

Would you call yours a success story?
A clear-cut success. I'm very happy here. The field of QA has a lot of interesting aspects and a lot of responsibility in terms of the quality of the products we market. The company also allows me to advance and grow toward various fields, despite the perception that it's hard to move from QA to another field. A lot of developers at the company were initially in QA, advanced after a set time to development teams, or other fields within the company itself.

Do you have any recommendations or suggestions for jobseekers?
First of all, don't give up. Looking for a job is a fulltime job, which must be run in an orderly fashion. I recommend you scan the Internet sites, send out as many resumes as possible and not be picky, especially if it's your first job. I very quickly focused on the Jobnet site because I found it to be the easiest to work with. I think the site meets all of the needs of a fresh university graduate.

Hadar, on cooperation with Jobnet:
The Jobnet site is an important recruitment channel for us. It's a very effective tool and we use it extensively. In addition to Niv, a good number of people working at the company came to us through Jobnet. Compared to other websites, we feel we're getting focused resumes and our work with the site's recruitment consultants is very smooth and efficient.